Reject Connecticut Bill 88: Don't Let Yourselves or the People You Care About Become Sitting Ducks to Predators 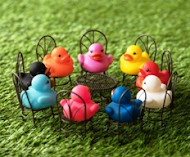 I am an attorney and president of Choice is an Illusion, a nonprofit corporation opposed to assisted suicide and euthanasia. I have personally appeared and testified against these practices in 20 US states and also internationally.[1]

The proposed Connecticut Act, Raised Bill No. 88, seeks to legalize physician-assisted suicide and euthanasia as those terms are traditionally defined.[2] This will be on both a voluntary and involuntary basis.

The Act is based on similar acts in Oregon and Washington State. I urge you to protect yourselves and the people you care about. Vote “No” to reject Raised Bill No. 88.

[T]he physician provides sleeping pills and information about the lethal dose, while aware that the patient may commit suicide.[5]

“Assisted suicide” is a general term in which the assisting person is not necessarily a physician. “Euthanasia” is the administration of a lethal agent by another person.[6]

B. Aid in Dying

“Aid in dying” has been a euphemism for assisted suicide and euthanasia since at least 1992.[7] The proposed act defines aid in dying as follows:

Note that per this definition, self-administration is allowed, but not mandated.

Withholding or withdrawing treatment (“pulling the plug”) is not euthanasia if the purpose is to remove burdensome treatment, as opposed to an intent to kill the patient. More importantly, the individual will not necessarily die. Consider this quote from Washington State regarding a man removed from a ventilator:

[I]nstead of dying as expected, [he] slowly began to get better.[9]

III. HOW THE ACT WORKS

The Act has an application process to obtain the lethal dose. Once the lethal dose is issued by the pharmacy, there is no oversight. No doctor, not even a witness, is required to be present at the death.

Resulting death will be reported as natural on the patient’s death certificate. Reports issued by the Department of Public Health will not contain identifying information of any patient or health care provider[10]. Any data collected by the Department will not be subject to disclosure under the Freedom of Information Act.[11]

B. “Eligible” Persons May Have Years or Decades to Live

The Act applies to persons with a “terminal illness,” meaning those predicted to have less than six months to live.[12] Such persons may in fact have years or decades to live. This is true based on the Oregon and Washington experience with their similar Acts, and common knowledge that predictions of life expectancy can be wrong, sometimes way wrong.[13]

Patients may also have years or decades to live because treatment can lead to recovery. A well known example is Jeanette Hall. In 2000, she made a settled decision to use Oregon’s Act. Her doctor convinced her to be treated for cancer instead, such that she is alive today. In a recent declaration, she states:

It has now been 21 years since my diagnosis. If [my doctor] had believed in assisted suicide, I would be dead.[14]

C. Assisting Persons Can Have an Agenda

Persons assisting a suicide or euthanasia can have an agenda. Consider Tammy Sawyer, trustee for Thomas Middleton in Oregon. Two days after his death by legal assisted suicide, she sold his home and deposited the proceeds into bank accounts for her own benefit.[15] Consider also Graham Morant, convicted of counseling his wife to kill herself in Australia, to get the life insurance. The Court found:

[Y]ou counselled and aided your wife to kill herself because you wanted ... the 1.4 million.[16]

Medical professionals too can have an agenda. New York physician, Michael Swango, got a thrill from killing his patients.[17] Consider also Harold Shipman, a doctor in the UK, who not only killed his patients, but stole from them and in one case made himself a beneficiary of the patient’s will.[18]

D. Even if the Patient Struggled, Who Would Know?

The Act has a formal application process to obtain the lethal dose[19]. Once the lethal dose is issued by the pharmacy, there is no oversight.[20] No witness, not even a doctor, is required to be present at the death.[21]

In addition, the drugs used are water or alcohol soluble, such that they can be injected into a sleeping or restrained person without consent.[22] Alex Schadenberg, Executive Director for the Euthanasia Prevention Coalition, puts it this way:

With assisted suicide laws in Washington and  Oregon [and with the proposed Connecticut Act], perpetrators can ... take a “legal” route, by getting an elder to sign a lethal dose request. Once the prescription is filled, there is no supervision over administration. Even if the patient struggled, “who would know?” (Emphasis added).[23]

1. Self-administration is not required

The Act repeatedly describes the lethal dose as being self-administered.[24] There is no language, however, that self-administration is required.[25]

2. The lethal dose is “medication”

3. The Americans With Disability Act would override any prohibition of euthanasia

The Americans with Disability Act (ADA) is a US federal civil rights law “that prohibits discrimination against individuals with disabilities in every day activities, including medical services.”[28] Here, the proposed Act refers to the lethal dose as a medication to be prescribed, thereby rendering it a medical service.

Per the ADA, medical care providers are required “to make their services available in an accessible manner.”[29] This includes:

reasonable modifications to policies, practices, and procedures when necessary to make health care services fully available to individuals with disabilities, unless the modifications would fundamentally alter the nature of the services ....[30]

Per the proposed Act, the fundamental nature of the services is the provision of a lethal dose of medication to end a patient’s life. If, for the purpose of argument, the proposed Act can be read as requiring self-administration, the ADA would nonetheless require providers to make a reasonable modification for individuals unable to self-administer. For example, by providing the assistance of another person to administer the lethal dose. This would be euthanasia as traditionally defined.

IV. ACTIONS TAKEN IN “ACCORDANCE” WITH THE ACT WILL NOT CONSTITUTE SUICIDE OR HOMICIDE

The Act does not define accordance.[32] Dictionary definitions include “in the spirit of,” meaning “in thought or intention.”[33]

V.  DEATHS WILL BE “NATURAL” AS A MATTER OF LAW

Connecticut requires the manner of a person’s death to be reported as one of six categories, five of which are substantive: (1) homicide; (2) suicide; (3) accidental; (4) natural; and (5) therapeutic complication.[34] The sixth category is “undetermined.”[35]

As noted in the preceding section, a death occurring in accordance with the Act will not constitute suicide or homicide as a matter of law. The death will also not be due to a therapeutic complication or accident due its having been an intended event. This leaves “natural” as the only remaining substantive cause of death. The official legal manner of death will be natural as a matter of law.

VI. DR. SHIPMAN AND THE CALL FOR DEATH CERTIFICATE REFORM

Per a 2005 article in the UK’s Guardian newspaper, there was a public inquiry regarding Dr. Shipman’s conduct, which determined that he had “killed at least 250 of his patients over 23 years.”[36] The inquiry also found:

Per a subsequent article in 2015, proposed reforms included having a medical examiner review death certificates, so as to improve patient safety[38]. Instead, the proposed Act moves in the opposite direction to require that deaths be reported as natural. If enacted, family members and other persons will be able to kill under mandatory legal cover.

VII. PARTICIPANTS IN THE PATIENT’S DEATH WILL BE ALLOWED TO INHERIT

Connecticut Code Section 45a-447 does not allow a person guilty of killing another person (the victim) to inherit from that person.[39] Deaths occurring in accordance with the Act, however, are natural as a matter of law. More to the point, straight up perpetrators will be allowed to inherit from a victim so long as the killing is done pursuant to the Act.

If passed into law, the proposed Act will apply to people predicted to have less than six months to live, some of whom will in fact have years or decades to live.

Assisting persons can have an agenda, with more obvious reasons being inheritance and life insurance, but also, as in the case of Dr. Swango, the thrill of seeing someone die. The lack of required oversight at the death, coupled with the mandatory falsification of the death certificate and an otherwise near complete lack of transparency, will create a perfect crime in which perpetrators will be legally allowed to inherit.

The Act’s passage will render people with money, meaning the middle class and above, sitting ducks to their heirs and other financial predators. Protect yourselves and the people you care about. Say “No” to Raised Bill 88.

[1]  For more information about me, please view my curriculum vitae attached in the appendix, at pages 1 though 4.

[7]  See, for example: Maria T. CeloCruz, “Aid-in-Dying: Should We Decriminalize Physician-Assisted Suicide and Physician-Committed Euthanasia?,” American Journal of Law and Medicine, 1992.  Abstract in the appendix, at page 24.

[9]  Nina Shapiro, Terminal Uncertainty: Washington’s New “Death With Dignity” law allows doctors to help people commit suicide–once they’ve determined that the patient has only six months to live. But what if they’re wrong?” The Seattle Weekly, 01/13/09, excerpts in the appendix at pages 25 to 27; quote at page 27.

“Terminal illness” means the final stage of an incurable and irreversible medical condition that an attending physician anticipates, within reasonable medical judgment, will produce a patient’s death within six months if the progression of such condition follows its typical course.

[22]  The drugs used have included Secobarbital, Pentobarbital and Phenobarbital, which are water or alcohol soluble.

[34]  State of Connecticut, Office of the Chief Medical Examiner, “Frequently Asked Questions,” attached in the appendix, at page 47.